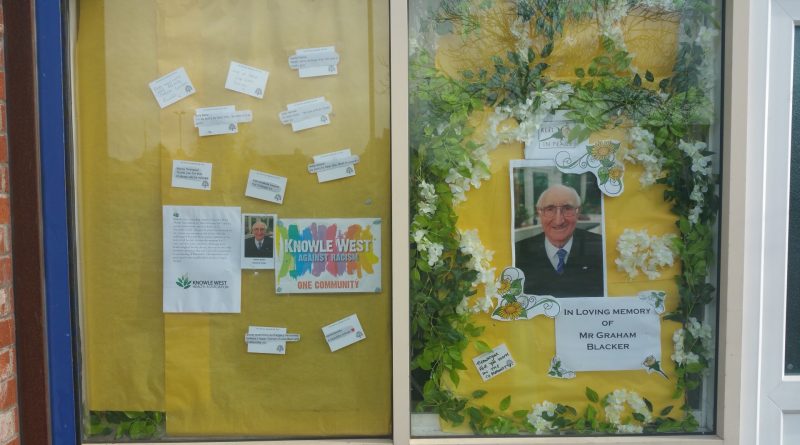 Main image: The window of Knowle West Health Association on Filwood Broadway – decorated in honour of Graham Blacker who was a long-term trustee there.

Knowle West has paid tribute to one of its longest-serving volunteers who gave over 65 years of service to the community.

Graham Blacker, who died last month at the age of 85, was a much-loved and modest resident – who worked tirelessly behind the scenes for many local organisations.

Although there were restricted numbers at his funeral at St Barnabas today (5 February) due to COVID-19 – the service will be streamed for a month for people pay their respects.

After the service, the cortege drove down Filwood Broadway on its way to South Bristol Crematorium – to mark Graham’s lifetime of contribution to the area.

Knowle West Health Association (KWHA) – where Graham volunteered for nearly 20 years also decorated the front of the building in his honour.

KWHA Treasurer and trustee, Edward Duffield says: “Graham was a founding trustee of Knowle West Health Association on 14 February 2001 and he served continuously until his death on 31 December 2020.

“The part he played in the work of the charity was enormous and always with the wellbeing of Knowle West and its residents at the heart of all he did. He was the treasurer for 17 years and then joint chairman.

“Although poor health weighed heavily during last year he was fully involved right up to the end even with a telephone board meeting in December. His experience and great care for the neighbourhood will be hugely missed.”

Graham started his volunteering journey in 1952, when at just 17, he trained as an Assistant Youth Leader in his local church.

Throughout his life he continued to be active in the area and was secretary at Knowle West Baptist Church for more than 40 years.

In 1995, he and his wife Sheila joined a steering committee, with representatives of other churches, to help start Filwood Hope.

It opened its doors on Filwood Broadway in December 1996 as an advice and support centre for the community – with Graham on the management committee and a volunteer there for over 20 years.

Centre Manager Pearl Aitken says: “…Graham served in this role faithfully and helped steer the centre throughout the years.

“As different needs arose Graham was usually the one to step up. This included being a volunteer on a weekly basis, welcoming people into the centre. He was still a serving board member and volunteer when he passed away.

“He was one in a million and he will be greatly missed by trustees, staff and volunteers at Filwood Hope.”

Graham was also on the board of Knowle Development Trust from 2006 and continued when it became Community in Partnership Knowle West in 2010.

The charity is responsible for managing Filwood Community Centre and “for ensuring that the views and needs of the local community are represented”.

Centre Manager June McNeil says: “Graham was such a gentle man, always supportive and a good listener, he would go out of his way to help anyone.

“He loved his roles on different boards and took his duty to them seriously, and always did his best to help sort out any problems that would arise.

“We really do miss him coming in to our office for his daily catch up. I think each one of us would have something to tell you about him of which mine is a small tribute…”

Graham’s other roles included being a school governor and a Friend of Filwood Library.

In May 2013, he had the “great honour” of receiving The Lord Mayor’s Award to mark a milestone of 60 years of volunteering in the community.

Interviewed several times by The Knowledge about his volunteering achievements, he said in 2017: “I’m trying to cut down, but I feel it gives me something to look forward to when I get up in the morning. I will continue to work as long as I can, because it helps me as well as people on the estate.”

He kept his promise, continuing to serve until recently when he was prevented by ill health.

A regular attendee at the Hearts and Stars volunteers’ award ceremony, held annually at Filwood Community Centre, he received certificates each year for his work – and was also given a Lifetime Achievement Award.

Last year he was also awarded a star in the Filwood Fantastic Hearts and Stars Awards – which celebrated the efforts of volunteers, key workers and neighbours “going above and beyond to make a difference and support the local community”.

These are currently displayed in the courtyard at Filwood Community Centre.

Resident and long-term volunteer Ken Jones (88) who has known Graham from when he was a boy in the Cub Scouts at Broad Plain, has worked alongside him in the community over the years.

He says: “I probably knew him longer than most people. He was a good friend and colleague and will be sadly missed.”

To view the service for Graham visit www.spirolux.co.uk/client Password Blacker41

Donations can also be made to St Peter’s Hospice via Just Giving.

October 3, 2017 reporter2 Comments Off on Find out more about South Bristol housing scheme 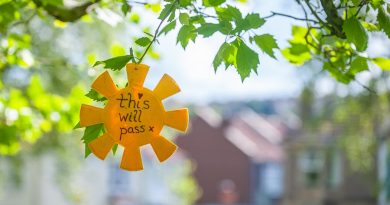 June 23, 2020 reporter2 Comments Off on Campaign to “spread kindness”