Well, basically in my picture I have been imagining of the [intlink id=”172″ type=”page”]future in Filwood Broadway[/intlink] and how popular it can get when it has been [intlink id=”172″ type=”page”]refurbished[/intlink].  In about 30 years or so I would imagine that there is going to be robots will be around but they would be employed in the shops to serve the community. 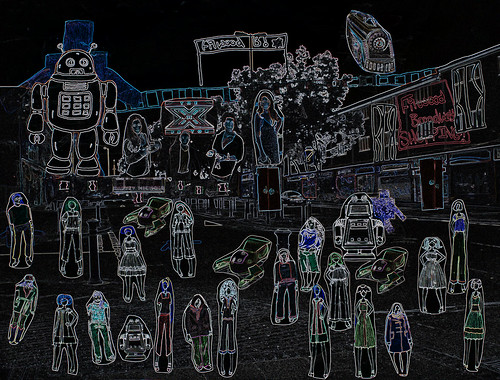 In this picture it is packed full of people having a good time poking around the shops. On the right of this picture is a shopping mall called FB! This I think could drive a lot of people to the heart of Filwood Broadway. Because it gets so busy here my theory is that the producers of the x factor have decided to hold auctions for the x factor in Filwood Broadway.  As the x factor is there everyone wants to audition and go shopping so they added a hovering train track in and a flying train. Which attracted even more people even sometimes celebrities! Over looking all of it is the leader robot and he rules Filwood Broadway. He commands all the worker robots. The effect I have put on it is meant to be night time and everything is all in Bright lights as there is late night shopping.