For my project I decided to change Filwood Broadway into a surreal circus in the city. I decided to do this because I liked the idea of the bright colours on the greyscale image, also I wanted to incorporate animals into the picture. There is a number of different circus related things in the picture such as elephants, a trapeze artist and a juggler. I also used quite old-fashioned aspects of circus, which is why I have chosen to frame it in a fancy, gold frame.

Some of my inspiration came from Banksy. I liked the idea behind his vandalised paintings so decided to use that as a base for my project. 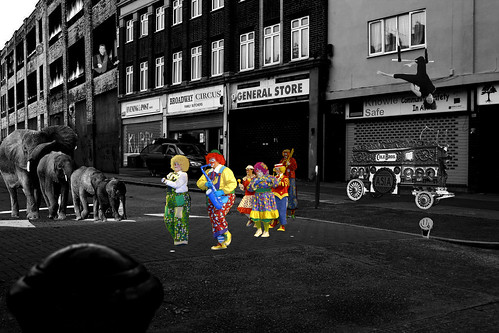 When they [intlink id=”172″ type=”page”]redevelop this area[/intlink] I hope they don’t just replace it with more flats and supermarkets but instead something interesting that people from a young age could use, such as a cinema or leisure centre. Maybe there could be somewhere where clubs could be held or some sort of green space where it would be safe for young people to hang out. This way people from different area’s [intlink id=”172″ type=”page”]Bristol could benefit from the redevelopment[/intlink], along with a vast age range.