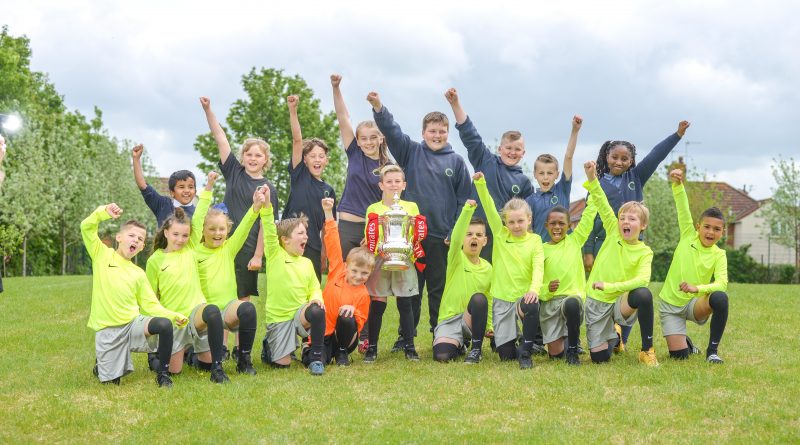 A nationwide hunt for the muckiest football team ended in Knowle West – with a local school winning a visit from the Emirates FA Cup and brand-new kit.

With the World Cup about to start – the LG TWINWASH™ Football Challenge was launched, linking with the National Schools Partnership (NSP), to find the muddiest and most active football team.

Parents, teachers and coaches were asked to submit match reports and photos of their ‘victory kits’ to the NSP – with Team OAC from Oasis Academy Connaught beating over 300 other entries for the title.

As an Official Partner of The FA, representatives from LG Electronics and the FA Cup visited the school in  May, where pupils were able to get a taste of glory ahead of the football season by lifting the world-renowned, coveted Cup.

He said: “.., We’re pleased to give Team OAC the ultimate recognition by allowing them to celebrate their glory with a visit from the official Emirates FA Cup – the ultimate motivation as we enter the big summer of football.”

Principal of Oasis Academy Connaught, George Fraser, added: “We are delighted for our pupils that they have won a new football kit and a chance to get up close to the FA Cup trophy.

“Many of our pupils, both girls and boys, really enjoy sport and especially football.  It is great exercise and they have been really developing their teamwork skills this year.

“We are really grateful to LG for the opportunity; we are always looking for ways to keep children active and the TWINWASH Football Challenge and match reports is a brilliant idea. Our pupils had a great time having their photo taken with the trophy, and we look forward to seeing them proudly wear their new kit in the near future.”

September 20, 2019 Reporter Comments Off on Celebration of Knowle West musicians at Homecoming event

April 7, 2017 Reporter Comments Off on Protest against loss of free pharmacy scheme

August 3, 2021 Reporter Comments Off on Community rapid testing vans out in Bristol